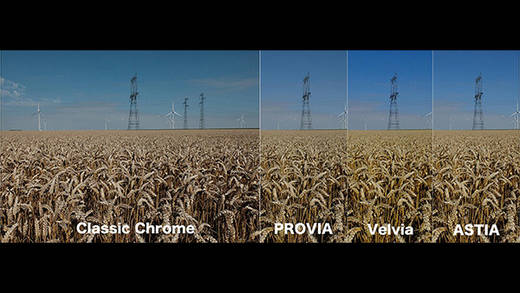 Manufacturing photographic film for many years means Fujifilm has a wealth of image production know-how and our digital camera imaging technology harnesses that knowledge. Fujifilm has developed five separate color Film Simulation modes for X Series camera that photographers can select, just as they would with film. PROVIA, Velvia and ASTIA are designed to deliver the deep color tones of reversal film, while PRO Neg. Std and PRO Neg. Hi emphasize skin tones. As a result, Fujifilm’s Film Simulation modes have established a solid reputation, but professional photographers using the cameras have also requested further Film Simulation modes to expand their creative options.

2. Aiming for advances in color reproduction

The most frequent request we received, particularly from photojournalists, was for a mode with more muted tones, so we analyzed hundreds of documentary-style images to find out exactly what kind of effect photojournalists were looking for. We reached the conclusion that good documentary-style images allow the photographer to put something of themselves into their work, so we created a Simulation mode that allows the photographer to tell the viewer a story. We also took into account the recent trend for photographs to be viewed more frequently on digital devices rather than as physical prints and worked to create a mode that looks like a print when viewed on an LCD screen in JPEG format.

3. Creating a Simulation mode without a reference film

Unlike previous Film Simulation modes, Fujifilm’s newly developed CLASSIC CHROME is not designed to reproduce an existing film but instead aims to reproduce the ambience found in documentary-style photographs and magazines. The name ‘CLASSIC CHROME’ reflects a mode reminiscent of the images each individual carries in their mind and the physical prints of such images.

4. The characteristics of CLASSIC CHROME

CLASSIC CHROME is characterized by its colors and tones. Images shot with CLASSIC CHROME generally have low color saturation and full-bodied tones. When we analyzed relevant images, we were particularly struck by how tones in skies were reproduced so this became one of our key areas of focus. When the sky includes a hint of magenta, the resulting color is rich, but with CLASSIC CHROME we moved in a different direction and created new colors by removing the magenta component. CLASSIC CHROME also controls the saturation and hue of reds and greens to produce a unique chromatic balance.

5. Fujifilm’s Film Simulation modes are evolving with their users

In developing CLASSIC CHROME, we have listened to the opinions of professional photographers to create a new style of color reproduction. We believe this will provide X Series users with a new method of creativity and we hope photographers can put it to a variety of uses. By combining CLASSIC CHROME with the camera’s image quality control features (including shadow tones and highlight tones) to match the scene and emotion, users can achieve a broader creative range. Fujifilm has listened to feedback from professionals and users of our cameras to further enhance our existing Film Simulation modes and we will continue to do so.