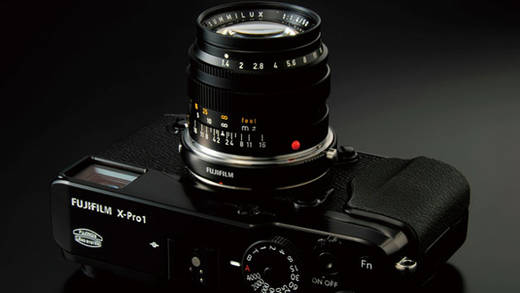 Their unique optical characteristics have won M Mount lenses the support of many present-day camera enthusiasts. Thanks to the winning ways of the FUJIFILM M Mount adapter, you can now enjoy the unique properties of these lenses with FUJIFILM’s interchangeable lens digital camera, the FUJIFILM X-Pro1, which boasts unsurpassed image quality that makes it one of FUJIFILM’s flagship models.

And that’s not all: this adapter does more than simply make it possible to attach M Mount lenses. On the contrary, it has all the features one would expect of a genuine FUJIFILM mount adapter.

This page describes the worlds created by the X-Pro1, M Mount lenses, and the FUJIFILM M Mount adapter and tell the story of how the adapter was developed.

1. Developing a Genuine FUJIFILM Adapter That, Although an Accessory, Is Worthy of the X-Pro1
2. Matching the X-Pro1 and M Mount Lenses in the True Pursuit of Photographic Excellence
3. High Quality and User-Friendly Operation Made Possible by a Genuine FUJIFILM Accessory
4. Image Processing That Gives the Full Flavor of Lenses Designed for Film

1. Developing a Genuine FUJIFILM Adapter That, Although an Accessory, Is Worthy of the X-Pro1

The mirrorless X-Pro1 has a flange-back distance of 17.7 mm and eliminates the optical low-pass filter generally found in digital cameras in favor of an X-Trans CMOS sensor that directly brings out lens performance. It is also equipped with the optical (hybrid) viewfinder so desirable for taking snapshots. And it features a rangefinder style design….

One can be sure that from the moment the X-Pro1 appeared on the scene, there have been those who wished they could use it with M Mount lenses.

The M Mount lenses made for the film era but still actively used by many camera enthusiasts now share star billing with the X-Pro1. The combination of the varied and highly distinctive features of M Mount lenses with FUJIFILM’s flagship digital camera could only serve to broaden the photographic horizons of the X-Pro1.

Our thinking at this point was, “A mount adapter has to do more than simply allow lenses to be used with the camera”. Image quality, ease-of-use—even with non-FUJIFILM M Mount lenses, we wanted results worthy of the X-Pro1.

Our aim was to create a product with added value, different from run-of-the-mill mount adapters. We thought of M Mount lenses as “just another genuine FUJIFILM lens”, and it is no exaggeration to say that we did our utmost to enhance their ease-of-use and make the most of their optical performance.
Summicron 50 mm F2: f/5.6 1/2 s ISO 400

2. Matching the X-Pro1 and M Mount Lenses in the True Pursuit of Photographic Excellence

When you try using the X-Pro1 with an M Mount lens, one of the first things you’ll notice is how well both products perform.

While on most of today’s digital cameras, settings such as shutter speed aperture are adjusted using push-buttons or command dials, on the X-Pro1 aperture, shutter speed, and exposure compensation are adjusted using numbered dials. The X-Pro1 also features a viewfinder for framing photographs. Oddly enough, both resemble controls formerly found on cameras from the film era. A design that puts “taking pictures” to the forefront has features that transcend time.

Frame subjects in the viewfinder with your right hand on the shutter speed dial on top of the camera and with your left on the lens aperture ring: intuitive operation that is the same whether you are using an M-mount lens or a lens designed specifically for the X-Pro1.

The secret behind the X-Pro1’s unsurpassed image quality is its X-Trans CMOS sensor, which has no optical low-pass filter. It is well worth noting that it is this sensor that brings out the individual characteristics of the lens, allowing the joys of M-mount lens photography to be appreciated to the full.

The X-Pro1 has no low-pass filter which might affect lens performance, and consequently can be used for works that bring out the characteristics of individual lenses.
SummonM 35mmF2.8: f/2.8 1/30 s ISO 400
Hybrid Multi-Viewfinder’s Bright Frame Changes with Lens Focal Length

Snap photography can only be enjoyed to the full by using deep focus and tracking your subject in the viewfinder while waiting for a chance to release the shutter. The X-Pro1’s OVF mode let’s you experience snap photography with no time lag, more evidence of how well the X-Pro1 and M Mount lenses work together.

The bright frame used to compose photographs can be adjusted for lens focal length using the MOUNT ADAPTER SETTINGS option in the camera menus.1 Note that this requires firmware version 1.10 or later.
Updating Firmware

Another function that enhances the camera’s compatibility with older lenses is film simulation, a feature one might expect from a film company like FUJIFILM.

Film simulation options like “PROVIA”, “Velvia”, “ASTIA”, “PRO Neg. Hi”, and “PRO Neg. Std.” reproduce the colors and gradation of the films you have come to know and love over the years. Contrast for older, low-contrast lenses can be increased by choosing “PRO Neg. Hi” or “Velvia”. Choose the standard “PROVIA” option for photographs that reflect the original performance of the lens, or create softer images with “PRO Neg. Std.”. Or choose a monochrome film simulation mode combined with a color filter for creative effect…. The X-Pro1 brings back the film-era sensibility of choosing a film and lens to suit your creative intent.
SUMMICRON-M 90 mm F2.0 ASPH.: f/4 1/2 s ISO 400

3. High Quality and User-Friendly Operation Made Possible by a Genuine FUJIFILM Accessory

One prominent feature of the FUJIFILM M Mount adapter is that it has signal contacts. These allow the camera to communicate with the mount adapter just as it would with the X-Pro1 lens. This gives the M Mount adapter the performance one expects of an X Series camera.

The features described on the pages that follow require camera firmware version 1.10 or later.