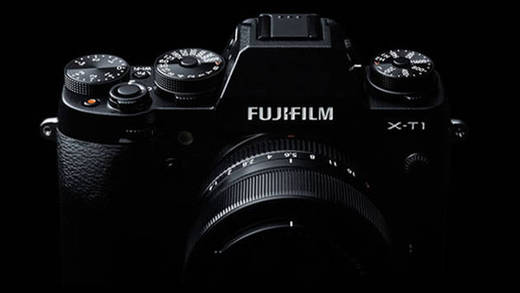 Authentic design refined with X-DNA, as a reliable “tool”

1. Beautiful SLR from the days of film cameras realized with a mirror-less camera

One of the design characteristics of X-T1 is the pentaprism which symbolizes SLR cameras. The pentaprism part that contains EVF with the maximum finder magnification for digital cameras is slightly large considering the body size. The sharp and solid linear design like classic SLR cameras expresses simple functional beauty and lets users see the camera as a high-performance tool.

The grip is shaped so that it fits comfortably in the hand and built in the smallest size necessary so that the entire camera is moderately compact. The ISO dial has been added to the 2 dials adopted in the existing cameras in the X series for the top deck, making the total to 3 dials. Function buttons have been additionally installed on the back side for customized use. Similar to existing X series cameras, buttons for playback mode are aligned on the left side of the body. Sophisticated and functional design was pursued while verifying operability of each operation area to express “authentic appearance”.

2. Arrangement of each operation area that enable instinctive operation

Taking operation during shooting in mind, the shutter speed dial and exposure compensation dial, which have the highest priority, were positioned on the right side, similarly to existing X series cameras. The new ISO dial was installed on the left side and the drive and photometry were installed below the dual-structure dial to enable direct operation of the 5 main functions.

With the command dial is installed on the front and back, a total of 6 function buttons are installed on the front, top and back to achieve highly customized use. This operation system aims for instinctive operation of dials and buttons using the thumb and forefinger on both hands as if playing a piano, instead of using only the thumb. We imagined the feeling of a musical instrument and the player spending time together and becoming familiar with each other, so much that the fingers naturally move before thinking. Since we believe cameras, which are tools that express images, share this feeling, an operation system that suits this was installed for X-T1.

Furthermore, the finder viewing mode switch button and visibility adjustment dial were installed on the side of the pentaprism area to enable users to operate such functions while looking into the finder and checking its effects.

A camera with an operating area that can be operated more instinctively, accurately and smoothly while looking into the finder and concentrating on shooting was pursued.

3. Vertical battery grip that boosts the potential of T1

A moderately compact body size was achieved, and in order to achieve better grip feel when attaching long lenses such as telephoto lenses, the vertical grip was also examined, similarly to the body.
In order to express the tool-look and functional beauty like classical SLR cameras, which is the deign image of the body, when attaching the vertical grip, a linear structure has been adopted with an image of the motor drive unit which was an accessory of classical silver halide SLR cameras, while giving a curve form to the grip so that it fits comfortably in the hand.

Since the vertical grip has almost the same cross-section as the body grip and is fully covered with rubber, similarly to the body, it has grip feel that fits comfortably in the hand when held both vertically and horizontally. It can be firmly held even with the pinky while maintaining comfortable grip feel when the grip is held horizontally, since it is shaped as if it is extending downward from the body. The buttons on the back side are also arranged so that major functions can be operated in the same way when the camera is held both vertically and horizontally.

Such pursuit of design, operability and functionality will make users feel a higher level of completion as a tool from X-T1 by attaching the vertical grip.

4. Included flash that is not only practical but also beautiful

The accompany flash to be attached to the hot shoe has been designed to make its presence and offer performance of optical equipment while maintaining affinity with the body, under the design concept of flat and solid. The slanted form seen from the top makes the camera look small and give impression of the flash light radiating. When it is closed, it fits in well and is compact, but when it is opened, it is raised higher to express its performance. This is not only for appearance but also to prevent vignetting when 18-135mm lens is set. As the design that expresses the flash performance accords with the authentic camera image of the body, we hope users will see X-T1 more attractive.