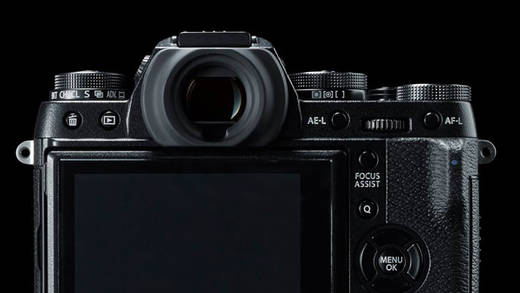 The optical system in the X-T1’s EVF is made up of 3 elements in 3 groups, which includes a double-sided aspherical glass lens with a large refractive index that delivers impressive clarity and a wide field of view. The field of view is 1.6x larger than the X-E2 – 31° compared to 25.1° – and finder magnification has also been increased from 0.62x to 0.77x making it the largest in the world, even amongst SLR cameras.
Increasing viewfinder magnification also increases the image display size, which can cause resolution issues and affect the consistency of blacks in shadow areas. This is impossible to evaluate mathematically or by using a simulated finder, so we used a prototype EVF and examined how light from different angles affected it.

The EVF panel in the X-T1 has the same specification as that in the X-E2, but has been improved to reduce the misalignment of colors when viewed at an angle. This was essential as when finder magnification increases, users look into the EVF at a more acute angle, which can cause colors to appear out of alignment.

The optical system in the X-T1’s EVF is made up of 3 elements in 3 groups, which includes a double-sided aspherical glass lens with a large refractive index that delivers impressive clarity and a wide field of view. The field of view is 1.6x larger than t

Any display lag between the EVF and LCD can mean missed shooting opportunities, so this time should be shortened as much as possible. In order to do this, we looked at the whole process, from reading the signal on the CMOS sensor to displaying it in the EVF.

Existing cameras display the image after the whole frame has been read from the processor, but on the X-T1, the image starts to display before the processor has completed developing the whole image, which reduces lag time and means the sensor and display are synchronized. Display lag time has also been reduced by increasing the frame rate compared to the X-E2.

The improvements mean the X-T1’s EVF has a world’s shortest delay of just 0.005 second. You may perceive almost no delay on the view finder compared to the real image.

Typically, to collect enough light to display viewfinder detail in low light conditions, the frame rate (number of still images displayed on the EVF in one second) has to be reduced. But this increases display lag. The X-T1 is designed for the frame rate to reduce more slowly than the X-E2 and although the rate is still reduced in low light, maintaining synchronization between the sensor and EVF ensures the lag time is kept to a minimum.

*1 EVF: Electronic View Finder
*2 Fujifilm research
*3 Finder magnification: (size of image seen in the finder at infinity with a 50mm lens) / (size of the subject seen with the naked eye)