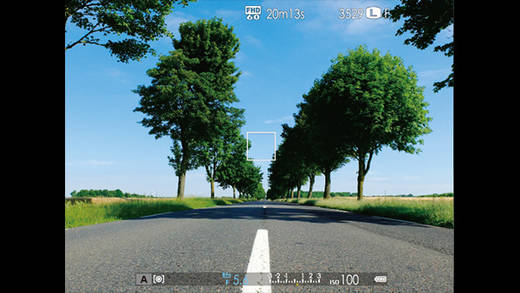 The high performance EVF (electronic viewfinder) in the FUJIFILM X-T1 received praise for its short display time lag, high-definition and wide field of view. So when the X30 was developed, the aim was to create a comparable finder for a compact.
Although the previous model – the X20 – was equipped with an OVF (optical viewfinder), the development of the X30 was started on the basis that it would feature a high quality EVF.

The latest organic EL panel featuring a high-definition 0.39-inch / 2.36 million dots was used in the X30 and, to accurately reproduce the image quality of this small, high-definition panel, a new viewfinder lens was developed.
Although very compact the high quality lens, which has a 4 element construction, including 2 aspherical lens elements, offers a horizontal field of view of 25 degrees; extremely wide for a camera of this size. Look through the viewfinder by yourself to truly experience the quality of image it offers.
It was also important for the finder not to distort or blur the image, even if the line of sight slightly shifts from the optical axis. Simulations were repeated during the design phase and prototypes checked carefully in order to ensure that the finder offered both a wide field of view and a reliable performance.

New features to surpass the OVF

Rangefinder style OVFs, such as those on the X10 and X20, suffer from parallax where there’s a discrepancy between the image in the finder and the actual range captured. Parallax is more pronounced the closer the shooting distance, but it does not exist in an EVF regardless of how close you are to the subject. Also, while the rear LCD can be used for playback of the image after shooting with an OVF, an EVF displays the same image as the finder.
Although these types of EVF have many benefits, there are few areas in which they cannot compete with an OVF, such as the reproduction of colors and brightness and display lag. By equipping the X30 EVF with the same algorithm as the “Real Time Viewfinder” in the X-T1, the display lag was reduced to 0.005 seconds, making it the world’s fastest EVF in a digital camera. Additionally, an automatic brightness adjustment feature has been developed, which creates a more natural finder image by keeping highlights bright and shadows dark. The Live View dynamic range has also been expanded, so the finder image accurately reproduces the subject.

A new generation of finder

One of the major features of the EVF is its ability to display the image to be shot using Film Simulation or digital filters before the shot is taken. However, we received requests from users who wanted to be able see the subject without the effects added, just as you would with an OVF. For this reason, we have added a mode that can be switched on and off so the effect is not shown in Live View. A mode to adjust viewfinder saturation has also been added.
Many photographers often shoot looking through the finder with one eye while using the other eye to observe the subject and its surroundings. When shooting like this, the settings of the X30 can be changed so that the image within the finder is natural like an OVF.

The X30 finder has to be seen to be believed, it is so realistic that you’ll forget it is an EVF on a compact camera.