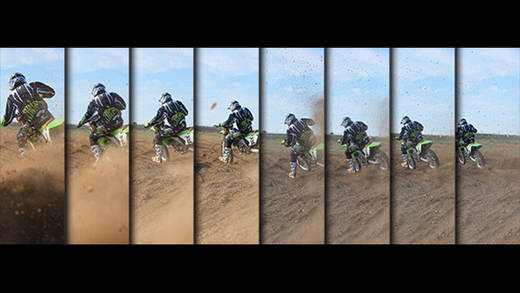 Lens control method was re-examined and optimized to speed up lens control. This is applied in single frame shooting, and response during normal phase detection AF is shortened by approximately 20% at maximum.

Such technology has helped achieve 8fps AF follow-up continuous shooting, to assure capturing the best moments such as goal of a race, trains and pets.

Performance of AF follow-up on moving subjects based on movement prediction has been improved for continuance AF with half-pressed shutter. Conventional follow-up speed was only able to capture running children, but it has now evolved to follow subjects closing up at a speed of 40 km/h.

In addition, it is also compatible with UHS-II of the new SD card standard, ahead of other companies.
Since images in the buffer memory can be written faster to an UHS-II SD card, time until the start of the next continuous shooting has been drastically shortened. Use of an UHS-II SD card is a promising choice for those who desire improved response.